Pirates of Emerson at Alameda County Fairgrounds In Pleasanton

Pirates of Emerson at Alameda County Fairgrounds In Pleasanton

Looking for something extra scary to do this Halloween? How about heading on over to the Alameda County Fairgrounds in Pleasanton, CA for the great Halloween Adventure: Pirates of Emerson – Haunting Fields! 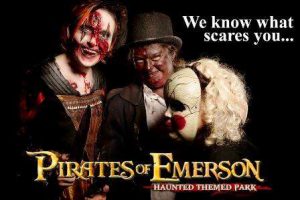 At the Fairgrounds for the first time this year, Pirates of Emerson has been scaring the stuffing out of people for the past 19 years; starting out in a backyard with a small group of friends and a few props. The attraction now covers almost 5 acres.

It’s like no other haunted house you’ve ever experienced, as they take the fright scale to all new levels with animation, real human interaction, robotics, and extensive special effects.

WARNING: This is an extremely scary event and some of the animation may be too much for younger audiences to handle. The Pirates of Emerson attraction is not recommended for those under 13 years old.

Pirates of Emerson has won several awards and accolades:

*Readers of Hauntworld Magazine have voted Pirates of Emerson one of the Top 13 haunts in the country.

*Pirates of Emerson is a recipient of the Bay Area Haunters Association’s prestigious “Excellence in Haunting” award.

*Playboy.com has named Pirates of Emerson one of the 13 most innovative high tech haunts in the nation.

*AOL has named Pirates of Emerson one of the Top 13 scariest haunts in the Nation for several years.

*Pirates of Emerson was featured on Discovery Channel’s America’s Scariest Haunted Attractions which aired October 2006/2007 on the Travel Channel.

Coupons like ‘Buy 1 Get 1 Free’ are passed out at numerous Bay Area events, many area papers will be running $3 off coupons, and the Alameda County Fair Facebook Page is running several “free ticket” contests as well.

Group Discount tickets must be purchased on-line and are NOT available at the ticket window. Please see Group Sales for more information.

Handicap Accessibility: Pirates of Emerson is ADA compliant and a staff member can accompany your group if desired.

Will the pirates touch me?
The theory is that if you don’t touch them, they won’t grab you. Bear in mind that this is a work in progress and doesn’t always go according to plan! Of course, in the darker areas, something may accidentally bump into you but our cast members will probably not grab you. You may be grabbed by one of the members of your own group who is too terrified to continue without your help.

Can I wear a costume?
You may wear any costume you wish, however we do not allow masks or other face disguising techniques. Trust us, this is for the public’s safety. It is too easy for a customer, in a mask, to do something inappropriate and then you, or us, having no way to identify them.

Can I bring my cell phone?
Sure, but be aware that we will NOT stop to look for lost cellphones or pagers (or most anything else). If we happen to find them, they will be available at the ticket window the next night we are open.

Is photography allowed?
Sorry, but not inside any of the haunted houses. There are many reasons for this including that a flash or strobe will temporarily blind our actors, it disrupts the other guest’s experience, pausing to take pictures slows down the line behind you and infrared will probably show you areas we don’t particularly want you to see!

If I’m too scared can I get a refund?
We have a no refund policy. You have paid for us to scare you. If you are so scared that you have to leave the haunt early and not go on then we have done our job. If we have done our job then there is no reason for a refund.