So we all know there is no cure for much of anything. But if you catch Gum Disease, Gingivitis & Periodontal Disease early it can usually be completely reversed.

Here are the top tips on fixing it and helping to eliminate bad breath:

Make sure any products you use earns the ADA Seal of Acceptance. They earn it by providing scientific evidence that demonstrates the safety and efficacy of its product, which the ADA Council on Scientific Affairs carefully evaluates according to objective requirements.

More than 75 percent of Americans over 35 have some form of gum disease. 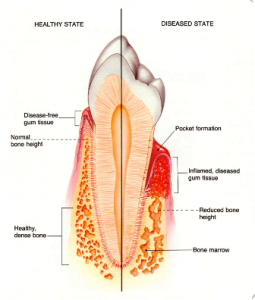 Signs you may have Gum Disease, Gingivitis & Periodontal Disease:

Why do gums recede? 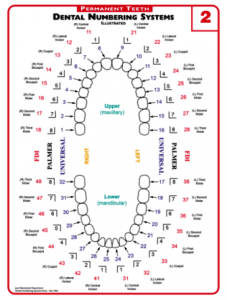 You might hear them call out a bunch of numbers while there poking your gums. That’s called dental charting. They are measuring how far a probe can go into your gums. The bigger the numbers the worse off you are. Health gums the numbers will be under 3. Gums should be nice and pink with no bleeding. 3 to 5 mm is beginning stages of disease and bone loss might be occurring. Anything over 5 is serious and needs to be fixed ASAP. 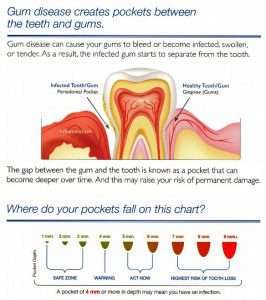 Gum disease is serious. According to the American Dental Association, advanced gum disease can lead to a loss of gum tissue and bone. It may also be linked to serious health conditions like diabetes and cardiovascular disease.

Gingivitis is the term used for the inflammation of gums. At this stage you will show signs of inflammation without gum recession or bone loss. Chronic gingivitis can be seen in most of the population and it is characterized by tender, swollen, red gums that bleed easily and may be responsible for bad breath. If not treated, it can advance to periodontitis and lead to further complications.

The primary cause of gum disease is poor oral hygiene, resulting in plaque buildup along and under the gum line. Plaque builds up when bacteria attach to the tooth and gum margins.

Periodontal disease refers to any disease (actually several) that affect the areas around the teeth (from the Latin “peri” – around and Greek “odont” – tooth).

While a regular dental cleaning is for the visible portion of teeth, scaling and root planing is a special cleaning that removes plaque and tartar (also known as calculus) from under the gumline (in periodontal pockets) and smoothes the root surfaces to promote healing. A scaling procedure is the only way to remove calculus from this area.

Choosing A Mouthwash:
What’s the best mouthwash to use to help create a nice clean mouth?
There are two types of mouthwash: cosmetic and therapeutic. Cosmetic mouthwash temporarily control bad breath, but have no long term application beyond their temporary benefit. For example, if a product doesn’t kill bacteria associated with bad breath, then its benefit is considered to be solely cosmetic. Therapeutic mouthwash, by contrast, has active ingredients intended to help control or reduce conditions like bad breath, gingivitis, plaque, and tooth decay.

Active ingredients that may be used in therapeutic mouthwash include:

Cetylpyridinium chloride may be added to reduce bad breath. Both chlorhexidine and essential oils can be used to help control plaque and gingivitis. Fluoride is a proven agent in helping to prevent decay. Peroxide is present in several whitening mouthwashes. Therapeutic mouthwash is available both over-the-counter and by prescription, depending on the formulation. For example, mouthwashes containing essential oils are available in stores, while those containing chlorhexidine are available only by prescription.

Mouthwashes with therapeutic agents like antimicrobials, however, may be effective for more long-term control of bad breath. Antimicrobials in mouthwash formulations include chlorhexidine, chlorine dioxide, cetylpyridinium chloride, and essential oils (e.g., eucalyptol, menthol, thymol, and methyl salicylate). Other agents used in mouthwashes to inhibit odor-causing compounds include zinc salts, ketone, terpene, and ionone. Although the combination of chlorhexidine and cetylpyridinium chloride plus zinc lactate has been shown to significantly reduce bad breath, it also may significantly contribute to tooth staining.

When used in mouthwashes, antimicrobial ingredients like cetylpyridinium, chlorhexidine, and essential oils have been shown to reduce plaque and gingivitis when combined with daily brushing and flossing. While some studies have found that chlorhexidine achieved better plaque control than essential oils, no difference was observed with respect to gingivitis control. Cetylpyridinium and chlorhexidine may cause brown staining of teeth, tongue, and/or restorations.

Some studies show an alcohol based (ethanol) mouthwash could potentially cause oral cancer. It works by killing germs and bacteria in your mouth. It also burns when you use it and will dry out your mouth a bit.
Children younger than the age of 6 should not use mouthwash, unless directed by a dentist, because they may swallow large amounts of the liquid inadvertently.