Power At The Electrical Panel / Breaker

Always follow NEC National Electric Code & use a licensed electrician. I highly recommend a WIFI smoke alarm and having a Class C rated(electrical) fire extinguisher nearby.

How much power can you run on one circuit breaker / fuse on the main electrical panel that comes into the house?

If your room/shed is already wired it’s most likely one of the combinations below:

For the circuit breakers I recommend using ones that are GFCI circuit breakers and arc fault circuit breakers. It this particular type isn’t installed now, and most likely they won’t be, they only take 5 – 10 minutes to install. You’ll be thankful if your rig ever melts down, short circuits or the dog ever sticks his nose on your open air rig! If not sure how to do this use an electrician.

When buying breakers generally don’t go to home Depot or Lowe’s. Go to a good electrical supply house.  Look for breakers that are made with Silver tungsten carbide contacts and not just plain copper. The copper ones fail and eventually arc over.

14-gauge wire is the smallest allowed for a 15 amp circuit. I recommend using 12-gauge; especially if you have a long run.

For 20 amps 12 gauge is the minimum size allowed. I recommend 10 gauge; especially if you have a long run. The smaller the number on wire size the bigger the wire and more current it can handle.


Higher voltages are more efficient then lower voltages and you can put much more power down the same size wire at higher voltages, saving a bit of money there in wire costs. If you run something at 120 volts pulling 15 amps at 240 volts it only pulls 7.5 amps. Look how many more rigs you can put on the same circuit now! 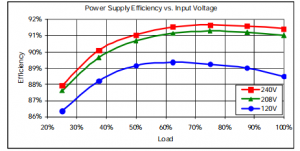 Going to 240 just to be more efficient and save on power probably doesn’t make sense for most of us. You power saving will be a measly  1 – 2 percent.

So say your rig is using 1,000 watts every hour (1 Kilo watt hour) for 24 hours at $.10 a kilo watt hour. That’s 24 kilo watts of power used a day. Coming out to about $2.40 a day or $72 a month. One percent of power savings is a saving of only $0.72 cents for the entire month. Now if you have a server farm, it starts to add up and you want to really spec your components with ones that are efficient. But for just a couple rigs, it really doesn’t matter.

How many watts can a circuit handle?

How much power does my circuit already have running on it…

Most of us our going to throw a miner in a spare bedroom, shed or garage. So we need to find out what lights or outlets are currently powered by that circuit.

Turn on all the lights in the house. Plug a lamp into the outlet you want to put your miner on & make sure the lamp is on and working. Now turn all the breakers off in the main panel. Make sure all your sensitive appliances & computers are turned off before this. This next part helps if you have a second person. One by one turn on each circuit breaker, ask your partner if the light has turned back on. If not turn that breaker back off and do the next one. Once you’ve found the one that turns on the light, leave that breaker on. Now you need to go thru every single outlet in the house and see what ones have power. Label them or make a mental note. Find out how many watts each device is using that are plugged into those outlets. You can either read the label on the appliance or use a device called a Kill A Watt to find out. You just plug the lamp or whatever into the kill a watt and then plug the kill a watt into the outlet. It tells you watts, amps, volts, power factor, hertz, etc. After you’ve added up everything ( total watts normally running by lamps, tv’s, etc. ) connected to that one circuit; take those watts & subtract them from the max continues power that circuit can handle from whatever circuit breaker capacity you are using. For example the 120 volt 20 amp circuit breaker. Hope that wasn’t too confusing?

I also like to test the outlet to make sure it’s properly wired by using a outlet tester:

Don’t forget about things you can’t see like attic fans, ceiling fans, whole house fans, outdoor motion lighting etc. If one of the plugs has a motor on it or HID lighting, you may want to find a different circuit to put your mining rig on. Any times those type of devices turn on they use a HUGE amount of initial current and will probably reset, pop or blow the circuit breaker and turn off your mining rig.

Our mining rigs draw so much current it’s probably not feasible or worth it to pay for backup power. But I will mention it because a few of us are using our gaming PC or home computer to mine and we want to protect it from power surges, brownouts and blackouts.

What to look for in a backup power supply? The main thing is how long it takes to switch to backup & the kind of “wave” it generates. Most are all pretty good now-days. But one issue I have been seeing come up more and more. The APC consumer grade cheap ones use a stepped sine wave. On a lot of the newer digital computer power supplies the APC UPS power backups  won’t power up your computer. You have to get a true since wave backup power supply. Just something to keep in mind.

This cyber-power one doesn’t have that issue, but when the batteries die on these, they completely stop working. So be sure to keep an eye on them when the battery starts to fail or lose capacity.

I would probably use a backup power supply on your modem, router & switches; since these are a bit more sensitive & they don’t use too much power.

Here’s an APC one that is Pure Sine Wave, but it’s pricey..

If your running multiple rigs on one circuit make sure you use a high quality extension cord or power strip.  Those $5.00 ones at home depot will not cut it. Your going to start a fire or burn up your rig.

It’s also worth checking the specs of all equipment you are running of what environmental factors it can handle. Max & minimum temperatures & max and minimum humidity. We’ll talk about cooling, ventilation, air conditioning, swamp coolers, etc. in another article.

Wow, all this and we still haven’t’ actually got to choosing a power supply!

We have roughly two main choices for a for supply. Either a server type PSU or more of a home or gaming computer type power supply unit (PSU). If you’ve ever open up your home computer that’s the type you’d see.

Here’s one on Amazon from Bitmain; it will put out 1,200 watts at 120 volts or 1,600 at 220 volts. It has ten – 6 pin PCIe Connectors. Power cord not included, requires standard PC power cable (C13). If you have an old computer laying around the cord form that would usually work. Just make sure to check the amp rating on it & the length to make sure it has enough capacity for the device you are running. Some cords are super cheap and will cause a fire if used at the full 1,200 or 1,600 watts.

Here’s a compatible 120 volt power cord for your power supply:

If your going 220 volts their will be a lot more options for power cords, ask away in the comments for your specific application.

If your mining one of the other alt coins, you can still use the bitmain power supply but it will be much noisier and you might not get wifey approval.  So yea in the house, get a computer power supply.

Their are so many options for computer power supplies. Ultimately it depends what you are looking for and how many GPU’s are connected & how many watts your pulling. I’ll give a rundown on a few features you should look for…

I’d suggest getting a power supply tester as well to help diagnose when things go wrong. Many option out there. These are pretty cheap:

This post needs some cleanup, adding a bit more to it and  some reorganization…  Especially the last bit on power supply’s.. Any takers to fix it up a bit? I’ll get to it eventually. 🙂

Happy mining! Ask questions. I’d rather reply to your comments and questions then write endlessly here! 🙂